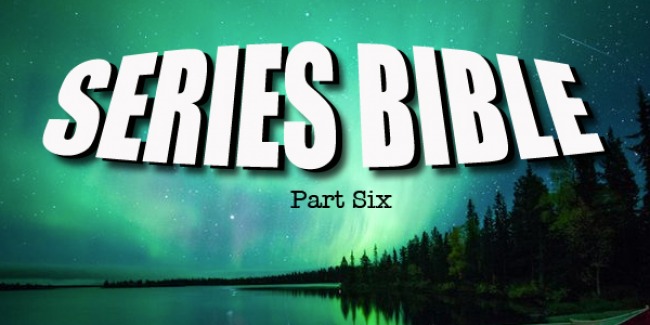 The series bible reveals the arc of the entire story. Parts one through five introduced the major players and big picture.

Part six explores the pitch and the two streams of story that flow from the inciting incident.

Skip this if you’re already up to speed.

Presence agreed to create a hybrid version of Carol Baauw’s ‘Journey of the seeds’ graphic novel as a TV series.

We invited Neville Radovic’s Think-tank team to create a cataclysm to end of world as we know it. Tony Vercoe created a long-tail meteor storm that explodes in the atmosphere creating a spectacular light-show and showering the earth in a fine red mist.

Just add the damned then stir for flavour

The fine red mist contains a guest. The returned souls from the abyss, hell-bent on living large. In just one night, seven billion people are wiped from the earth. The survivors have either missed the event or are the most dangerous of the remaining possessed.

We invited our global team of writers to submit story ideas describing day one of the cataclysm.

Sydney team members, Rose Kusdogan and Jon Manez proposed shooting Roderic Byrnes’,’Vera or Samantha’ script set in London as a trailer for the project but the scale and budget forced us to reconsider.

We chose instead to focus on creating a short, sharp general trailer that would introduce the global cataclysm and kick-off the story.

As the long-tail meteor storm disintegrates in the atmosphere above, a fine red mist drifts to earth. Once inhaled, the mist seduces the inhaler, generating a party-pill style euphoria and removing all inhibitions.

Once seduced, the returned spirits from the abyss possess humanity, sometimes many spirits entering the same body.

The possessed become locked in their own minds. The returned spirit then controls them. Team Moscow’s , Nikita Ivanenko and Daniel Garcia created a scene titled, ‘House by the lake’ as part of their Moscow series that describes this event.

What’s up with the souls from the abyss thing?

We’ll get to that. For now, take it that this is stratagem. Two great powers are playing out a battle. This is a move in that battle. Just like the story tag states, ‘Humanity’s end is just the beginning’. If humanity can survive this, one of us will transcend to become the first, ‘Creator seed’ a creator of universes and mentor to species.

Too complex? Messing with your mind? Just think, ‘Walking dead meets the possessed’. Replace zombies with demons then sit back, relax and let the biting begin.

The trailer also includes what we lovingly refer to as the ‘super-sperm’ representation of the meteor storm’s arrival. The trailer ends on the vision of Toowyn’s realm from the parallel universe and the three swords upturned.

This is a reference to Toowyn’s unexplained visions of the home and life he has forgotten.

What’s up with Toowyn’s visions and the parallel universe?

The team approached the HOD with murmurs of discontent re the title, stating, ‘Journey of the seeds’, may be seen as a reference to reproduction. We polled the members and decided to change the title.

Reference for the title

Writer, Maria Durso requested greater reference material re the series content so the team could contribute their ideas for the new title.

The HOD is creating a series of posts covering the basics of a series bible to provide a greater reference to the team. More will follow. This is Part Six.

We launched the title contest but asked the team to hold back until we raise sponsorship to pay them for their IP.

The HOD has already commenced reaching out to Sponsors including a character naming rights offer.

We’re now planning to shoot a trailer in the first half of 2015 depicting the arrival of the meteor storm all over the world and the beginning of the chaos. It will feature the storm, the euphoria that follows then people bouncing off windowpanes.

Australia, (unaffected by the storm), witnesses the lights go out all over the world. In just one night, seven billion people are wiped out leaving Australasia and a few pockets of survivors left. We leave the trailer on one of those, ‘What just happened?’ moments.

OK, let’s take it to the next level.

Earlier this month, Head of Development –David Steinhoff met with Director –Richard Gibson and Mythbusters’ Producer –Peter Rees. They examined the pitch for the Journey project and came to a conclusion, ‘Dumb it down.’

Let’s take the example of the sci-fi TV super-hit, Battlestar Galactica. Imagine pitching this story to investors. How would you do it?

By now, your investors’ eyes have glazed over.

Even if you dumb it down to, ‘It’s just like Asimov’s ‘I Robot’, but in space’, you’re still going to hear, ‘What’s an Asimov?’

Message? You cannot dumb it down enough. Battlestar Galactica is just, ‘When robots attack humans, humans must fight for their survival, in space.

Being similar to something else allows you to reference it. We could say, ‘It’s just like ‘Walking dead’ but with demons.’ Double the scary.

If we take this approach, we’re not losing content or quality. We’re dumbing down the presentation. We hold-back the good stuff from the presentation otherwise we’ll go the way of Gattaca, (David Niccol’s masterpiece with such poor marketing it died a tragic death at the box office).

Whatever the title and presentation of the work, you have to immediately get what its about and want to see it. We’d like to see your vote on this. Yes, simplify the pitch, No, keep the complex fantasy side in the presentation.

When you’re considering your choice of vote consider this, not only did Sharknado get produced and distributed, two sequels followed. We’re not suggesting we turn Journey into Sharknado but someone pitched that to the money and got it made. ‘Nough said.

Vote and let us know your view. Want to say more? Log in and add your comment below.

We described the story as just like, ‘Walking dead but with demons’ but there’s more to it.

This is a tale of two survivors.

After the Day one inciting incident, there are two groups of survivors and two streams of story.

The survivors in Australia

The first group, (in Australia), don’t know what’s happened. The northern hemisphere and land-bridges are shrouded in red mist.

This story is just like, ‘On the beach’ but we survive, for now.

Australia has lost GPS, the internet and all communication with the rest of the world.

The Australians first get to see something is very wrong when survivors arrive by plane and ship to New Zealand. The survivors are possessed and NZ goes the way of the rest of the world.

The Australian Prime Minister issues a ‘Sink, shoot-down and kill’ order against all ships and planes trying to enter Australia. Nothing shall enter.

Problem solved. Not quite.

Australia imports refined oil. It has lost its car manufacturing. It doesn’t even make baby formula. Even palm oil, used in most refined foods is lost to us. In no time short, there’s chaos.

The world economic system is interconnected. No nation is an island. Australia is gripped with the fear that whatever the red mist is, it will come to Australia and in the meantime is tearing itself apart as society implodes.

Meanwhile small pockets of survivors, all over the world, emerge to discover an apocalypse.

The survivors living with the possessed

The second group, (not in Australia), fight for their lives against the possessed and each other. They have no idea that Australia has avoided possession.

This story is just like, ‘Walking dead but with demons.’

A guide to the sub-genre of Walking dead

Here’s how this kind of story works.

Typically, a survivor wakes up from coma, walks outside and discovers the city is empty.

This provides a ‘keys to the city’ experience. That’s an empowering experience for an audience however this is followed by a first encounter with the threat.

The threat cannot be reasoned with and is always scary-dangerous. The threat provides an opportunity to, ’kill without remorse’ and that is also a very empowering experience for an audience.

The lesson? No matter how scary the threat is, humanity is a lot scarier.

Throughout the last quarter, we pitched to a number of potential sponsors without result.

Part of the problem lies in the current pitch. We may need to dumb it down.

The other problem is alignment. We’ve tried to sell it on the characters and the story and how a brand or company can benefit through association. That isn’t working. Nor our sponsorship offer. Not even our character naming rights.

You can understand the commercial TV channels in Australia bumping all their drama back to 9.30pm and later. If they don’t run dating, cooking and home renovation shows, they don’t sell advertising. Even news programs have info-ads running through them, posing as news and even with all that, they still struggle to make it pay.

Our concept allows for a global franchise. That’s like taking ‘Walking dead’ and creating local language franchises of the work, all over the world. That’s an exciting sponsorship and financial model.

If you know anyone that might fit that bill, contact us. You may be eligible for an Executive Producer credit and commission.

We can approach industry partners but regrettably, the policy always seems to be the same, you fund it, you make it, if it’s good, we want it but we don’t want to pay anything for it and if it works, we’ll replace you and do it ourselves.

It’s a tough industry but get it right and there is a change to create something really outstanding, provide on-going work for the industry and to make it pay. Getting it right is no cake-walk.

Recently, we had a team member leave the Journey project citing that they were frustrated the project had not gone into production yet. We graciously accepted their resignation.

Most Australian productions go to market under-cooked, with underdeveloped stories that underwhelm audiences and fail to profit investors.

We’re taking the time to get it right.

We’re focused on long-run, world-wide cable for the sci-fi and fantasy market.

Ours is a global and sustainable franchise.

Our objective is to create a series that will run for three, four or even six seasons to provide a wealth of quality content and employment for our team.

For the Journey project to progress we must;

Whilst we reach out to sponsors and investors to raise capital, we encourage team members to donate to support the cause. If you’re a starving artist, we don’t want your money but if you’re doing OK, why not lend your support via a donation? When you donate, you gain equity points on our Leaderboard and that’s a love we can send back your way in the future.